Improving Your Odds A Simple How To 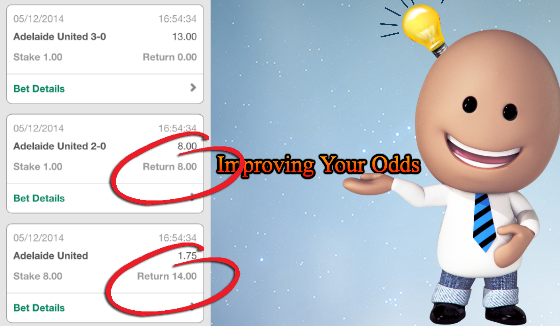 So, instead I placed $8 on a win. I then placed a buck on Adelaide United scoring 2 goals and another buck on them scoring 3 goals. I figured they were the more likely outcomes.

As it turns out Adelaide United won with a score of 2-0 and my total winnings $22 which was a $12 return. That just happens to be a greater than 50% return than if I just put a bet on Adelaide United to win. I reckon that shows this technique to be a pretty good way of improving your sports bet. My odds went from 1.75 to 2.2. It would have been a lot better if Adelaide United scored another goal. And they should of too but they missed so many bloody times.

This isn’t a problem if you’re like me and only place a small wager on a game in order to increase the excitement value of the game you’re watching.