Every now and again a punter just has to have a go at a long shot. A long shot is when a punter decides to place a bet on a horse, team or sport outcome that hasn’t a hope in hell of winning. You can usually tell when a betting opportunity is considered a long shot.

When deciding about this weeks bet of the week I wondered whether or not I should be placing some money on a long shot. So I fire up my Sportingbet

app, went to the sports section, Aussie Rules and then AFL Round 21. It didn’t take long to find that the AFL round 21 long shot was the Sydney vs St Kilda game. That particular game will kick off at the SCG on Saturday August the 16th at 1:45pm. So, how much was I going to place on St Kilda to beat Sydney. As you can see from the image below, if you can take your eyes of the sexy blonde long enough 😀 not all that much.

The odds on St Kilda to beat Sydney, at the time I placed the bet, was $17.00. So, if a miracle was going to result in a St. Kilda win my dollar bet would result in a $17 win! As far as I’m concerned there’s not a chance in hell that St. Kilda will beat Sydney, but then upsets have been known to happen and if it does that will be my biggest win ever. Especially considering the minimal outlay. 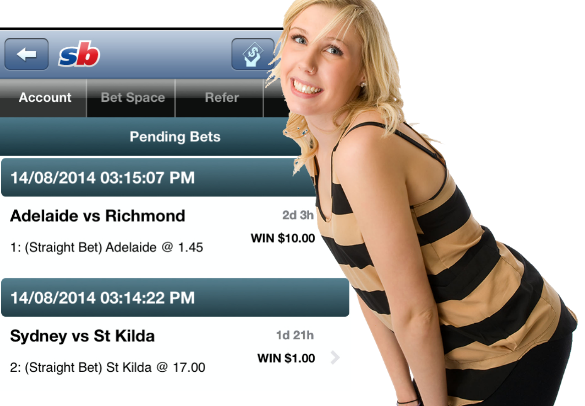 OK, so I got that long shot bet out of the way, which is really a fun bet more than anything else, now it’s time for some serious online sports betting. My main bet is going to be on the Adelaide vs Richmond game which is being played at the Adelaide Oval on Saturday August 16 at 7.10pm.

After the Crows win against the Brisbane Lions, last weeks Bet Of The Week, I’ve decided to let the money ride on my favourite AFL team, the Adelaide Crows. That last win got them back into the eight and I know their going to do their best to stay there. Not only that, they have to do well if they’re going to appease their fans, especially because they’re playing at home. I know their 19th Man will do all they can to get their team across the line too. They’re going to scream their lungs horse and woe be those umpires that make those dumb arse calls. If they do that, and they will, the fans will boo there sorry arse right out of Adelaide Oval.

Over to you now. Have you ever bet on a long shot that paid off? IF so leave us a comment, we’d love to hear from you.

But before you go, what do you say about basking in a little Crows glory as they win the last Showdown. They said it couldn’t be done but I backed the boys and I won. Go The Crows!