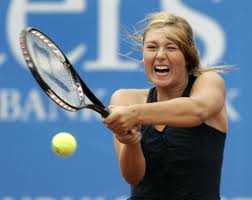 The last time I wrote about Maria Sharapova was when she featured as a Hot Sports Babe. Since then she’s been banned from tennis as a drug cheat. As her doping ban nears a close she would have to fight her way up the ladder just to be included in a tournament. That is of course unless she’s offered a wildcard!

Much to the disappointment of many a tennis fan, and some big name tennis players, Maria Sharapova has been offered a wild card at the Porsche Tennis Grand Prix.

Why Maria Sharapova Is Offered A Wildcard.

According to her agent, Max Eisenbud, ‘The interest has been there, claimed Eisenbud. “Every WTA tournament called me, every single one,” he said.’

Personally I reckon it’s purely a business decision. Tournament officials obviously believe that Maria Sharapova will be a draw card. I’m sure more people will come to watch her play than would avoid attending because of her presence. Everyone involved wants their tournament to be a success and those offering Maria a wildcard obviously believe she will help to secure that success.

Former No.1 Chrissie Evert supports the wildcards being offered saying, “Maria has served her term and this decision of playing is really within the rule as far as the wild card entry,” Evert told the media. “I remember many, many weeks I started out on a Wednesday playing a match so it’s not like first rounds aren’t on Wednesday.”

Me, I’m more than happy to have her back. Who knows, with the break she was forced to have Sharapova may even be really successful.

What’s your feelings on her being offered all these wildcards.