Don’t you hate it when umpires get it wrong? I know it sure as hell pisses me off, especially if I have money on the game! I really feel for sorry for Seventeen year old Maria Vittoria Viviani who was disqualified from the Australian open for hitting a ball kid.

When I first heard this story I thought that Maria smashed the ball at the ball kid. The reporter made it sound as if it was almost intentional. Then I saw a video of it and I thought, what a lot of bullshit! You can see the incidence in the animated gif below.

As you can see Maria Vittoria Viviani hardly put any force into that ball at all. It was merely a moment of frustration and she was immediately apologetic when she realized what she had done. I’m sure if the ball boy/girl was more attentive he would have caught the ball with ease. Instead it hit him in the chest and the dumb umpire took it upon himself to disqualify her. Poor Maria left the court in tears.

According to this article, on the same day, ” Japan’s Kei Nishikori softly swatted a ball away and made contact with a ball kid 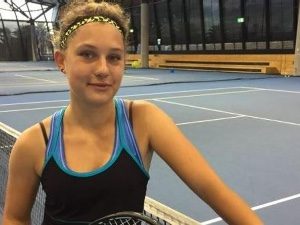 during his fourth round clash against Roger Federer – however he went unsanctioned for the accidental contact.” Shit, no wonder the up and coming tennis players may tend to act up when they see the pros getting away the same sort of shit.

Then again, if it wasn’t for some of the shenanigans that our tennis players come up with tennis wouldn’t be as entertaining as it is. We love the tennis racket smashing and the blowups almost as much as the brilliant rallies and such.

As far as dummy spits go Maria has a lot to learn if she wants to be renowned as the ‘bad girl’ in tennis :tongue_out:

Here are what others have had to say on the subject.

What’s your take on the Maria Vittoria Viviani incident