I can’t believe that some stupid wanker denied the Matthew Wright goal. I’m not just saying it as a Crow fan either. It wasn’t bad enough that the Crow’s game was not their best effort, but the one bloody highlight of that game, the  miraculous Matthew Wright goal was disallowed! What a lot of bullshit!

Didn’t see the game? Missed out on what should have been a great achievement had the Matthew Wright goal been allowed? Not to worry, The Adelaide Football club has put it online for all to see. I’ve embedded it here for you so you don’t have to go looking for it.

So, what did you think? Was that a goal or what? I know from the image below that both the fans and Matthew Wright were shocked and dismayed that goal was disallowed. 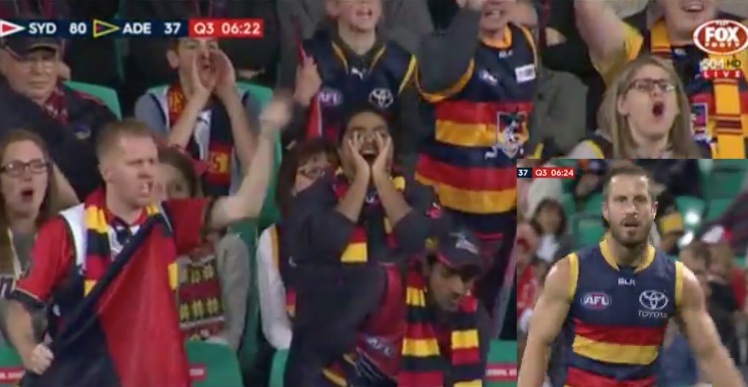 That video umpire should have his eyes checked. Shit was even watching the right video or was he playing Candy Crush or something? It was so obvious that Matthew Wright got his toe to that ball way before it was over the line. That makes it a goal not a rush behind. Fair enough the goal umpire might have missed it. Maybe he blinked to something. But that video is proof that the Matthew Wright goal was a wrong call.

Even the commentators were shocked at that call. How could you not be when the evidence is staring you in the face!

This Fox Footy article shares some tweets from those shocked by the crappy decision. Footy is all about the excited created by speckies, fantastic tackles and those goals that cause fans to jump in their seats when unbelievable goals are scored. The Matthew Wright goal was one such goal and it will forever be denied him and Crow fans because of some moron who can’t read a video properly. Don’t know where they get these guys from but the one that came up with this decision should be booted out.

What did you think of that call? Was it a goal or not.