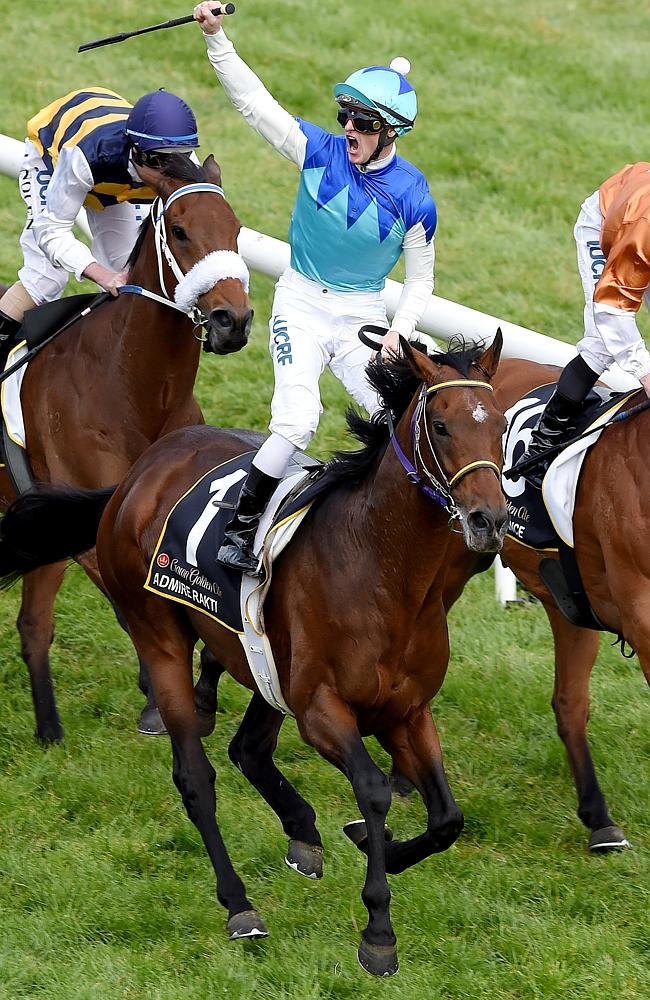 I’ve been doing a bit of research for the Melbourne Cup this year and it seems most horse race enthusiasts believe that the Melbourne Cup will go the same way as the Cox Plate and Caulfield Cup, in that some international horse will win it. What a bummer that would be. I’m sure most Aussies would want a local to win the race that stops the nation.

Admire Rakti: A Japanese horse. Although a favourite the Daily Telegraph says it’s not ranked in the top 20 stayers in it’s homeland.
Protectionist: A German horse. The Herald Sun says no truth to claims of Protectionist being lame and the second favourite will run in the Melbourne Cup.
Lucia Valentina: An Aussie mare is said to be by theAustralian as the third favourite in the Melbourne Cup. Even Peter Moody believes foreign horses will dominate the Melbourne Cup for at least a decade unless Aussie trainers do something about it.
Fawkner: Another Aussie was favourite in the Cox Plate but ended up behind the winner Adelaide. I’m not putting my money on this horse even if owner Lloyd Williams is after his fifth Melbourne Cup.
Mutual Regard: An Irish nag one wonders if this horse will have the luck of the Irish. Although Mutual Regard won the Betfred Ebor at 20/1 the Melbourne Cup is a horse of a different colour. 😉
Araldo: From what I can gather an Aussie stallion with 4 wins out of 15 starts. Fifth in the Caulfield Cup some still believe Araldo to be a Melbourne Cup hopeful.
Red Cadeaux: From the UK, yep that’s all we need a Pom to win the Melbourne Cup.  :laughing: According to theage no nine year old has ever won the Melbourne Cup. Although twice a runner-up I doubt Red Cadeaux can pull off a win.
Junoob: Jockey Blake Shin who was miraculously cleared of charges will be riding Junoob in the Melbourne Cup. Shinn, a previous Cup winner, believes the horse has a good chance of winning.
Who Shot Thebarman: Yeah, what a great name for a horse right? 😉 According to an article in theAge Glenn Boss the jockey while hesitant about the horse winning a major cup admits the horse has plenty going for him.
Brambles: The Australian reports Peter Moody as saying that Brambles will find winning the Melbourne Cup difficult.
Cavalryman: Another English horse ridden by jockey Craig Williams who believes his 9 year old will be the first in his age group to win the cup. Remember I said earlier that no 9 year old has ever won the Cup. Could Cavalryman be the first?
Seismos: Another Irish import. A6 year old chestnut gelding. Read more about the horse here.
Signoff: According to an article in the theAge Signoff is “is the type of horse who could upset better-fancied horses.”
Caravan Rolls On: Winner of the Geelong Cup Caravan Rolls On may struggle to win the Melbourne Cup.
Lidari: The Couriermail predicted that the odds would tumble if this horse made it to the Cup. Last I looked the odds went up to 41.00.
Big Memory: this horse was given a 2kg penalty for the Melbourne Cup after winning the Herbert Power Stakes. It’s interesting to not that the horse beat Signoff in that race.
Lord Van Percy: from the UK Sportsbet has this horse at 41.00.
My Ambivalent: While this horse couldn’t run in the Caulfield Cup because of a stone bruise the horse has been cleared for the melbourne Cup.
Royal Diamond: Running second to Willing Foe at Ebor At York perhaps Royal Diamond has the cutting edge in the Cup.
Au Revoir: Read more about this horse at OTI if your interested in buying the colt. Imagine the price hike if this horse won.
Gatewood: According to trainer John Gosden Gatewood is in good form. Whether that form is good enough to win the Cup is another matter. Still, with Sportsbet offering 67.00 odds it certainly would pay off well.
Green Moon: Grren Moon won the 2012 Melbourne Cup.
Opinion: Apart from the fact that it’s a horse I couldn’t find much on Opinion other than Sportsbet is offering 67.00 odds on it.
Amralah: Also at 67.00 odds the horse is being trained by Robert Hickmott who won the Melbourne Cup in 2012 with Green Moon.
Precedence: Started in 3 Melbourne cups finishing eighth (2010), 11th (2011) and ninth (2012). Could he win the Cup?
Willing Foe: A 7 year old Gelding from the US.
Noble Protector: A 4 year old filly.
Prince Of Penzance: A surprise winner at Mooney Valley Cup, could the 5 year old gelding win the Melbourne Cup.
La Amistad: TheAustralian has a pretty good writeup on La Amistad.

I haven’t place my bet yet. So much to go through. Have you placed your bet? Will you be placing it online? If you haven’t joined an online Bookie yet there’s still time so you can place your bet effortlessly using your smartphone. Not sure of which online betting site to join? Why not let Fortuna our Lady Luck choose one for you?

How To Bet On The Melbourne Cup