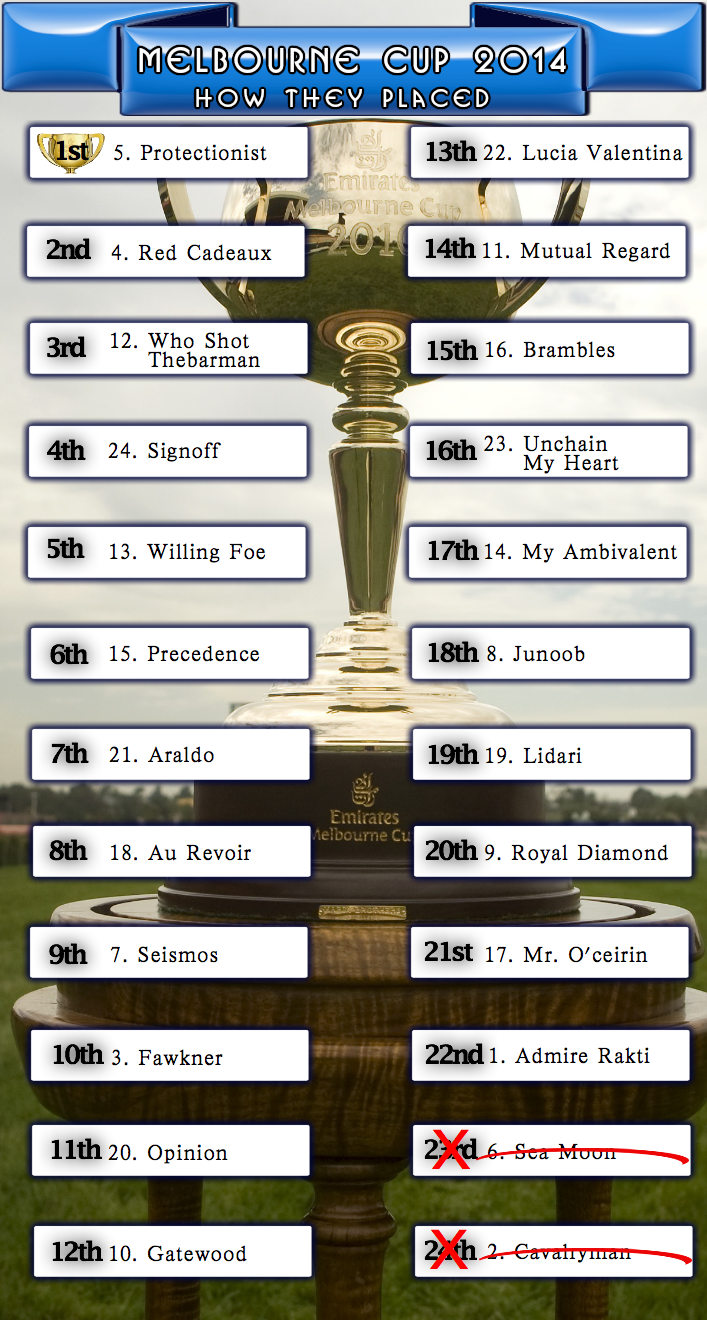 So there you have it, all the placings for the 2014 Melbourne Cup results. Do you remember my post on Tips for Picking The Winning Melbourne Cup Horse? I mentioned in that post how favourites rarely win and in the following post I didn’t take the advice and picked both Admire Rakti and Fawkner. Both were favourites and both failed to win the race, Fawkner coming tenth and Admire Rakti last. In admire Rakti’s defence, the poor horse wasn’t at his best. So, as it turns out that was another losing bet for me.

The Melbourne Cup The Race That Killed Admire Rakti

Unfortunately for the owners of the winner, Protectionist, are pretty well in the limelight as everyone focuses on the death of Admire Rakti. According to news.com.au….

“The diagnosis is that the horse died of acute heart failure as a result of ventricular fibrillation probably, which is a disorganised heart rhythm which happens very, very rarely in human athletes and in horses and is a consequence of the athletic heart and the rapid heart rate during racing,” Dr Stewart said on SEN Radio.

“It is very rare but it does occur.

“It’s a disruption of the normal electrical conduction through the heart and there can be various sets of circumstances that might set it off. Athletes are probably more prone to the syndrome especially those with large hearts and a big capacity to raise the heart rate … throwing it into this abnormal rhythm and the heart is unable to supply enough blood for the body.”

While sad it isn’t anyones fault. It certainly should not be used as an excuse to stop horse racing as is being suggested by many horse lovers.

it’s a shame that they had to air the demise of Admire Rakti as he died in his stall. That certainly did not help the situation.

This years Melbourne Cup results in the death of another horse, Araldo, who was spooked by a child waving an Australian flag. Araldo kicked out at a fence fracturing a pastern bone in the horse’s leg. Owners decided to euthanise the horse as the only humane thing to do. Once again a freak accident and no reason to ban horse racing in Australia.

Should Horses Be Whipped In Races?

Whipping a horse to make it run faster is not something that I can agree with. As far as I’m concerned whips should not be used in any horse race. That would be like running behind a someone in a race with a whip in and effort to get them to run faster. It’s simply unthinkable and in my opinion the it’s no different in horse races.

What is worse that the whip though is the anti rearing bit. Unfortunately most punters and race goes do not realise that these bits cause the horse more distress than the whips do. The reason they’re oblivious to it is because unlike the whips which are very visible in the race the rearing bits are not. I found this interesting article on The Use Of The Anti Rearing Bit.

If we’re to be truly kind to our horses then perhaps we should stop inflicting pain on them. What do you think?