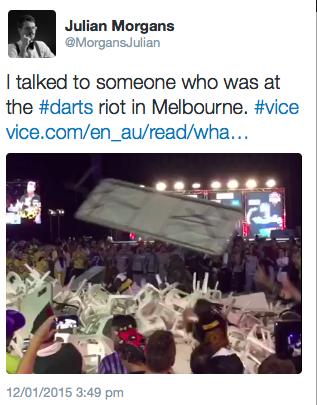 One has to asked why things got as bad as it did. Was it because there wasn’t enough security? According to this article they had 70 security guards on hand at the event. One has to wonder if they got on top of things at the beginning that it wouldn’t have got to the stage that it did.

Why didn’t they clamp down on whoever it was that cast the first chair? Were they just too far away? Maybe 70 security guards wasn’t enough.

Was it because they didn’t control the amount of beer that was served? Apparently most of the wankers involved were drunk.

I’m not sure how much a ticket to such an event was worth, maybe someone could let us know, but if you’re not into darts then why would you even bother going to such an event?

Was it because the event was held in Victoria? Maybe some of those Vics just don’t know how to behave at such an event. They sure as hell knew how to spoil it for those that actually wanted to see the pros throwing darts.

That many were thrilled by the Melbourne Darts Tournament was evident by the all the positive reviews at the tecketmaster website.I posted one of the many reviews below. 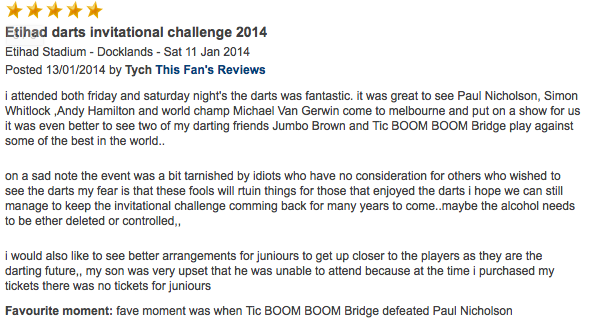 The Guardian reports that the future of further Melbourne Darts Tournaments could be in doubt because of the reaction of some dickheads in the crowd, Not really fair that the reaction of a few can ruin it for the rest of dart tournament lovers.