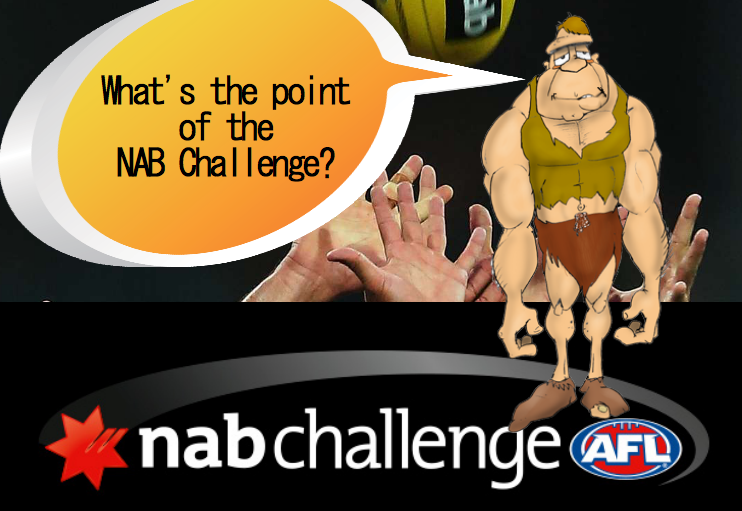 Why The NAB Challenge Is A Waste Of Time

Matches Are Held All Over The Place: If you have a look at the NAB Challenge fixtures for 2015 you’ll notice that a lot of the matches are being held at smaller insignificant ovals rather than the mainstream ones. Some are way out in whoop-whoop. This means a lot of the time they’re not even televised. For example, do they honestly think that footy fans are going to drive all the way to Port Lincoln to see the Adelaide vs Nth Melbourne game?

I wrote about my disappointment in not being able to watch that match on TV in my Winning Bets post.

Then there’s the Showdown between Port Power and the Crows. It’s going to be held at the old AAMI Stadium. As reported in Adelaidenow they’re doing fans an injustice by holding it there.

Port Adelaide and the Crows are going back to Football Park. Surely not. No, no, no. SA football fans do not need to be sent to a concrete bowl — that has had seats ripped out — to be reminded during a hot summer day why the game is better off at Adelaide Oval.

Watered Down Teams: It doesn’t matter which football team you support I’m sure you’ve noticed that they’re not playing their best players in the NAB Challenge matches. Can you blame them when they see that the AFL doesn’t seem to give a shit. That’s the impression I get anyway.

If they’re not fielding their best players then you’re not going to get the best games are you?

For me AFL Football is all about the crowds and the mind blowing atmosphere you get when fans get behind their teams. You just don’t get that when they play at these insignificant ovals. It’s almost like going to a SANFL game.

So, can someone out there tell me, what’s the point of having the NAB Challenge?