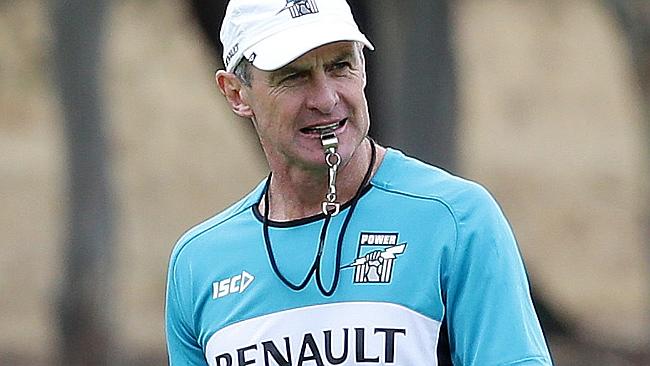 If you remember Brenton Sanderson was an assistant coach when he came to Adelaide. Now that he is getting it together that decide to give him the flick and take on another assistant coach from Port Power! Really? And how long are they going to persist with him before they give him the flick? Surely they don’t expect him to turn the Crows around in the first season? Don’t the Adelaide Crows and their fans deserve better than that?

I have to admit that after reading the Herald Sun article on our new Crows coach it almost had me believing that Phil Walsh is actually the man for the job. He sure sounds confident and he is definitely happy to have acquired the position as the new Crows coach thanking the board “for their belief and trust in endorsing me as the senior coach of this club”

The article then goes to say, “I suppose I took myself out of my own journey and thought, anyone who’s done what I’ve done probably deserves to be a senior coach.

“I’m 54 years old and it’s probably not going to come around again. I tell my kids to chase their dreams, so I probably don’t want to look back at 70 years old and think what might have been. So here I am.’’

So, there is this bloke who is 54 years old and has never held a senior coaching position in his life. He’s now grabbed what is probably his only chance of ever becoming a senior coach. The question is does he have what it takes to take the Crows to the finals?

After the way the Crows had treated Sanderson he at least knows what will happen if he doesn’t perform. Perhaps that and his determination to succeed is just what the club needs. the question is will the players relate to him? Will he be able to transform them to a winning team? What do you think? Is Phil Walsh the right coach for the Crows?

I voted no. I still think they should have given Sanderson another year.

Do you have something you would like to say? Go for it an tell us what you think.

[highlight]Oh, one last thing, Once you’ve voted don’t forget to share it on your favourite social media. The more people that vote the better the result.[/highlight]