In my search for reliable sports betting site I came across

As for Unibet there are many who say that punters love Unibet. That’s probably true because Unibet has become a trusted online sports betting agency. This is helped by the fact they’ve been around since 1997. They’re even listed on the NASDAQ stock exchange. You just don’t get to do that unless you’re a legitimate company.

I reckon that the reason Aussie Punters love Unibet is because Unibet acquired Betchoice in around 2012.

Betchoice currently employs around 35 people in Australia who will be integrated into the Unibet team. Betchoice operates under a Northern Territory sports bookmaking licence and has offices in Darwin and Sydney.

“This strategic acquisition gives Unibet immediate access to the regulated Australian market, which is currently open to sports betting and horse racing. We intend to rebrand the business quickly to Unibet. Betchoice already has a strong offering and market position in horse racing and through Kambi, Unibet has the opportunity to enhance the quality and performance of Betchoice’s sports betting offering and so to deliver revenue growth and margin improvements,” says Henrik Tjärnström, CEO Unibet

You can read more about the acquisition on www.unibetgroupplc.com.

As you know I usually only recommend online sports betting agencies that offer their members and app. This is so members can place bets online easily and safely. Unibet offers this, but also has mobile friendly website. This means that members who do not have the app still get a great betting experience while using their mobile.

Another thing that I liked about Unibet is the range of online sports that punter can bet on, from martial arts to tennis.

Punters who love Unibet include those who like to expand their online betting experience. They may want to go online to have a go at Bingo or the online Casino or perhaps even so that can play the

games scratch cards. This really piqued my interest but unfortunately it seems Aussies can’t take part. Probably has something to do with government regulations I recon. Bummer.

I haven’t joined Unibet yet but I reckon I will in the future. If there are any Unibet members out there I’d love for you to drop in and leave a comment on your Unibet online sports betting experience.

Last week I wrote a post on how I bet on the Crows to beat Collingwood!  Everybody said I was crazy and that they didn’t stand a chance in hell. I didn’t care, I had a gut feeling. Besides, Collingwood weren’t paying much so it wasn’t really work p;acing a bet on them. As it turns out the Adelaide Crows won and my bet365 kitty is slowly starting to grow. This week I’m taking another chance because I bet on Hawks to win.

Today Port Power is playing Hawthorn. Port Power’s playing at home and so they are the favourites. Not to mention that they are on the top of the ladder and have been playing very well.

The Hawks are third on the ladder but are sporting some injuries. having said that some of the young players have stepped up. Also, if you consider that the Hawks have won six of their past seven against the Power, including three of their last four matches in Adelaide, I reckon they actually have a good chance. Check out the Hawks full match preview.

As for the Power, they’ve just come off a bye so one would assume they’d be fit and raring to go. Even so this Power vs Hawks review show they’re not about to take the Hawks lightly. They know they’re fighting the reigning premiers who are not about to lie down and give them an easy win.

I was at work today when I checked my bet365 app during my break and noticed their odds were 2.65. It only took seconds to bet on Hawks to win. I’m not a big gamble so I only placed a $10 wager on them to win. If they do win it will net me $26.50! Now I just have to sit back with a couple of beers and, hopefully, watch the Hawks turn the Power’s light off.

I’ll be updating this post sometime after the match with the match results.

Clicking on the image above will take you to the Fox Footy site for full match details.

Shit, I can’t believe I lost that bet. I was sure the Hawks would beat Port Power. Oh well, you can’t win them all. 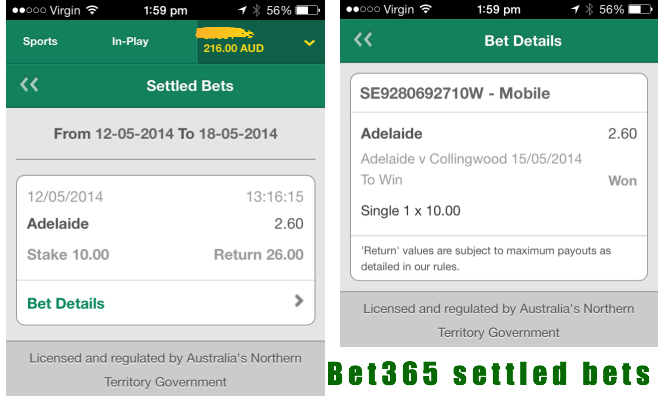