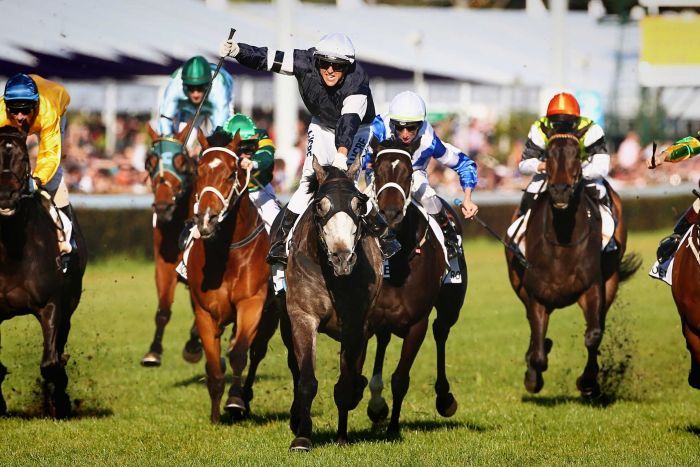 How To Pick A Winning Horse

Before we get to the serious job of how to pick a winning horse I thought I would start of with a little joke about how this particular bloke got some inside bet tips on the Melbourne Cup.

It all started when this bloke was having a few drinks by himself at a the Crown Casino in Melbourne when he met up with a striking but quite short and slim young woman.

They got on famously and ended up in bed.

The next morning she told him she was a jockey and that if he came to the races at Flemington that day, she’d tip him the winner of each race she was riding in by giving him a sign as she rode out of the saddling paddock.

In Race 2, she rode out rubbing both her boobs.

The bloke looked through the race book and found ‘Two Abreast’ on which he placed $100 at 5-1.

It won by two lengths.

In Race 4 she rode out rubbing her fingers round her eyes..

In the last race she came out standing up in the stirrups and rubbing her crotch..

After the races, he met up with her and thanked her for the winners in races 2 and 4.

‘What about ‘Itchy Mickey’ in the sixth?’, she asked. ‘It paid a fortune’

‘Shit’, he said, ‘I thought you were telling me the favourite was scratched!’

While that was funny it doesn’t usually work in real life. That’s why I’ve managed to find some tips that may help you to pick a winning horse in the Melbourne Cup. These tips are from long time punter John Beedle of Ashfield.

Just keep in mind that these tips won’t guarantee you a win in the Melbourne Cup but it may increase your chances a bit.

Tips On Picking The Winning Horse

The worst thing you can do while at the races is trying to chase your money. By this I mean if you bet $100 on a horse and lose that you do the same thing on the next race in an effort to win your money back. You then lose that bet so you bet even more on the next race. Not only is this the complete opposite of responsible gambling it will turn what is supposed to be an enjoyable time into the day from hell!

Having a great time at the Cup is what the Melbourne Cup is all about. Your’e supposed to have fun on that day and betting only what you can afford to lose will help you do that. That’s probably why a lot of punters don’t give a hoot about studying the racing form trying to pick the right horse. Some will just pick one out of the blue. I know one woman that closes her eyes and places a pen over the racing form and whichever horse it landed on that was the horse she would put her money on.

Some Melbourne Cup punters choose their horse solely on the horses name. It could be because the name is way out of this world, like Who Shot Thebarman, or perhaps because it has some sort of personal value. Sort of like the Cox Plate race last week. I would have been a winner if I had picked Adelaide, being from Adelaide and all.

How will you pick your Melbourne Cup Winner? Who do you plan to place a bet on?