Every now and again you get a sportsman or sportswoman who shows real guts while competing in their sport. They continue on against all odds. Those watching them are absolutely amazed and will usually say that they have showed real guts. To that end I wanted to start the Real Guts Award category.

The real guts award was inspired by the actions of Sam Burgess during the NRL Grand Final last week. The fact that South Sydney 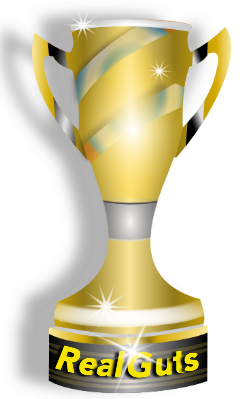 won their first title in 43 years with a victory over Canterbury Bulldogs was amazing enough. Some will say that their victory was inspired by a stellar performance by the rugby bound man of the match, Sam Burgess!

So what did Sam do that earned him the Real Guts award? In the first tackle of the match Sam Burgess collided with James Graham. The head clash resulted in a fractured cheekbone. Where most players would have sat the rest of the game on the sidelines Sam Burgess would not have a bar of it. For the next 80 minutes or so Sam Burgess was in the thick of it all. It was if nothing at all had happened. He did not hold back one iota until his team had the title under their belt.

The Sydney Morning Herald referred to Sam Burgess as a real life gladiator. Rightly so too. Like the gladiators of old he did not give up until victory was in his grasp. Those who watched the clash of the titans agree it was a brilliant game. So much better than the crappy AFL finals that took place only a week before.

This is what Sam Burgess himself had to say. (As reported in the article above)

“I knew I’d broke it straight away,” Burgess said. “The side of my face just felt numb. My head was a little bit dizzy and I had a bit of blurred vision. But we just covered for each other and there were a lot of guys out there helping me through it. There was not a chance I was missing out.

“I wasn’t really listening to what [the doctor] was saying. The teammates really helped me through the process. I’m just really happy for the team … it’s been a great effort all year.

“James is a great competitor and I’ve got a lot of respect for him as a guy and a competitor. I just told him [at fulltime] I’m going to miss him. He’s a friend I’ll have forever, but that’s all that was said.”

Not bad huh, real guts and modest as well.

In case you missed the clash that won him the real guts award I found it on YouTube for you.

Who would you nominate for the Real Guts Award?