Check it out will ya! Fortuna’s round 16 footy tips results is her best ever! The only tip she got wrong was the Port Adelaide vs Adelaide game. I’m sure that most punters would have picked Port Adelaide to win but thankfully the Crows were able to get over the line.

What makes the win even sweeter is that this was more than your average showdown! It was the Phil Walsh Showdown Tribute. A tribute that was just as important to Port Adelaide as it was to the Crows because Phil Walsh had strong ties with both clubs.

If anything it was more important to the Power because the loss to them has probably ended and finals hope the club may have had.

What a brilliant game it was too. Both teams played well but the Crows were ahead in every quarter. I have to admit though that the last minutes of the game almost had my heart in my throat. What made the game even more exciting to me was that I didn’t just win 1 Multi-Bet. Nope, I won three of them!  :clap2:

What made that possible was that I backed the Crows instead of the Power! I don’t know why I went against Fortuna’s round 16 footy tips. I suppose it was partly because Fortuna hasn’t always got it right but in essence it was because I just had a gut feeling about it. 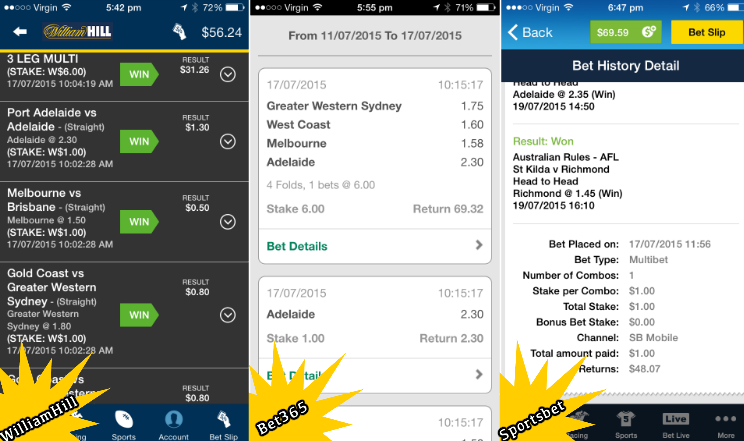 The image above shows the results of my three winning bets.

The middle image show the results of my wager with Bet365! You’ll notice that particular bet involved four games.The more games in a multi the better the odds. Which is why that bet won me a tidy $69.32! Add to that the single bets total of 3.33 brings my total Bet365 win to $72.65!

Finally the right part of the image shows my win with Sportsbet. I’ve mentioned in previous posts that I decided to join their Million Dollar Tipping competition. Every week since joining I placed my tips in that competition. Once I placed my tips I also used the same tips to place a $1 bet. As you can see that $1 bet won me a tidy $48.07. Considering the size of the wager it’s easily my best win by far and was only possible because I got 9 out of 9 right. How cool is that?  :drunk:

Therefore my total winnings for the round 16 footy tips resulted in a total prize pool of $159.38! That’s easily my biggest win and I’m more than happy to place that into my betting bankroll.

How To Bet On The Melbourne Cup