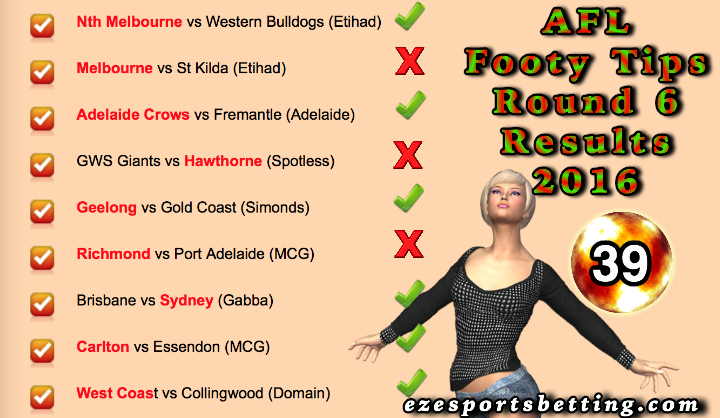 Fortuna’s Round 6 2016 AFL Results wasn’t all that bad getting only 3 out of the 9 wrong. That’s the thing when betting on the AFL, or any other sport for that matter. You just never know what the outcome is going to be. That’s why its so important to gamble responsibly.

As for my Sportsbet Multibet, it was absolutely one of the worst multi bets I’ve ever placed. You can see my multi-bet picks here. You’ll notice that I only got 2 of my five picks right. Of those the two that I found surprising was the Richmond vs Port Adelaide and the GWS Giants vs Hawthorne games. I should know better than to back a Port Power game. I’m sure they won that game just to piss me off  :RLOL:

This week wasn’t a total loss though. It did have two major highlights. The first was that the Crows managed to beat Fremantle. This puts the Crows in the seventh position, 4 spots above Port Power. Being above Port Power is always a good thing.  :tongue_out:

Instead, after 13 long years, Adelaide City United won their first final becoming the A-League Champions. I was so thrilled for them, especially as they started so badly at the beginning of the season.

As far as my Multi-Bet loss it wasn’t that bad because as I’ve said before the way I place my multi-bets I’ve always g0t something back. This is because I always place a dollar on each of the 5 legs and the remaining $5 goes on the multi-bet itself. That way even though my Multi-bet loses my winning legs of the multi-bet still pays out. This minimises the loss and means my sports betting bankroll lasts that much longer,

What do you do to make your sports betting bankroll last longer.

Affiliates Turning Their Love Of Sport Into Cash