After noticing that people are still giving Nick Kygrios a hard time over his sledging incident I though I’d revisit the whole sledging thing. This is even though I wrote the post Nick Kyrgios Sledging Un-Australian. Most of the sledging in that post involved cricket so for today’s post I thought I’d have a look to see if there’s any sledging in tennis. Other than the Nick’s infamous ‘banging your girlfriend’ one.

The first one I managed to find involved Pat Cash.

Here is an excerpt from Uncovered: The Autobiography of Pat Cash

: “Boris (Becker) beat me in straight sets (quarter-finals of Wimbledon in 1988) and even had the cheek to play the fool. On one point I ran to a mishit drop volley and fell over the net. Making the most of my misfortune, he thought it would be fun to run and plaunge over the net as well. He thought it was hilarious and the crowd seemed to like the joke but the humour was lost on me… I resorted to some time-honoured Aussie sledging.

Merv Hughes would have been proud of me as I eyeballed Boris before informing him: “You’re a fucking smartarse Kraut!” Did I regret it? Not at the time but I do cringe at the memory.”

So, not only did he use the F bomb, he also used what some people would consider a racist term. In my opinion it’s somewhat worse than Nick’s banging reference.

I even found another article where Pat Cash recommends that there was more sledging in tennis as he reckons that would make tennis more exciting. I reckon he’s right on this one. 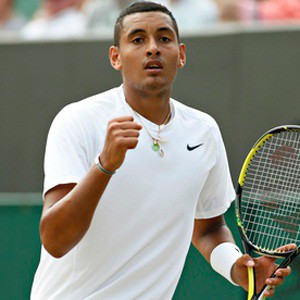 McEnroe is famous for his picturesque tirades which were normally hurled at umpires or linesmen. There was one time though  when a Czech opponent mistakenly hit him with a tennis ball and McEnroe told him: “You’ll be sorry you hit me you fucking communist asshole.”

Once again, we have the F bomb followed by what could be called a racial slur.

You know, apart from tennis players abusing umpires, ballboys and the like there’s not much out there about actual shenanigans on court. Sure there’s sledging (mind games) happening off court but not much on record of it happening during game play. The other thing to remember is that they didn’t have access to social media in those days. Social media can virtually crucify a person on line and if you ask me a lot of the stuff on social media is nothing but #bullshit!

I’m sure that it used to happen but because of the lack of mikes in those days there’s no record of it. I’m sure its those very same mikes that keep our tennis players in check today. Unfortunately for Nick he let a momentary lack of judgement get the best of him. I’m sure he knows better now and has learned from his mistake.

If I had any advice for Nick Kyrgios it would be this. Don’t let all the negativity out there get you down. Accept what you’ve done, put it behind you and get on with your tennis.

Oh, and don’t be an wanker when you’re on the court. Show everyone you have what it takes to be a champion. The best way to do that is to play great tennis. You want people to remember you for that and not for any crazy on court antics.

Online Betting And Why It’s So Popular

NAB Challenge A Waste Of Time?