I reckon we all know that sports have probably been a popular pass time for centuries. That being the case we can probably also say that punters have been betting on sports for centuries. Well I’ve come across a joke that is so old it’s positively Biblical. I give to you the……. 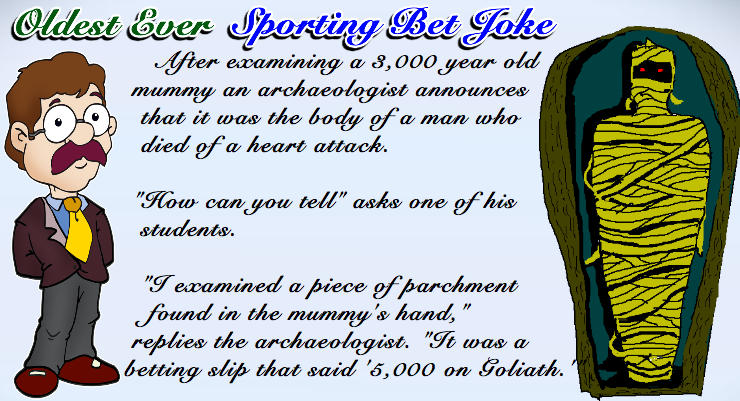 This next joke may not technically be a sport betting joke but it’s definitely a betting joke and it takes place in the most popular place ever for placing bets. The local pub.

A travelling salesman wanders into a country pub and  notices that there is a fishbowl full of $10 notes sitting on the bar. After ordering a pint of Fosters the salesman ask the barman what the deal with the fishbowl full of cash was.

“Well,” says the barman, “we have this donkey out the back who hasn’t uttered a peep in all the years that we’ve had him. If you can make that dumb ass donkey make some sort of noise you win all that money in the fishbowl. All it will cost you is to put ten bucks in the kitty.

“No bloody worries mate,” says the salesman. “I’ll take that bet!” The salesman proceeds to place ten dollars into the fishbowl and then wanders out the back. Not two minutes later the donkey stars to Hee Hawing. The salesman wanders back into the bar and without a word pockets all the money and leaves the pub.

A couple of weeks later he visits the pub again and notices the fishbowl full of $20 notes. He orders another pint of Fosters and points to the fishbowl. “Whats with all the money this time” he asks the barman.

“Mate, ever since the last time you were in we haven’t been able to shut that damn donkey up. Anyone who can shut him up will win everything in that fishbowl. This time though it will cost twenty bucks to give it a try.”

“Shit mate. That sounds like a really sweet deal. I reckon I’ll take some of that action!” The salesman pulls out his wallet and places twenty bucks into the fishbowl, shoving the wallet back into his pocket as he saunters out to the back of the pub. A few minutes later the donkey stops braying. There is absolute quiet! The salesman walks back into the bar and again pockets all the cash. He was just about to leave when the barman stops him. “Hang on a sec matey. Before you go running off again you have to tell us exactly what you did to make him bray and then what you did to make shut him up.”

Easy says the salesman. The first time I whispered in his ear and told him my cock was bigger than his. The second time I showed him.”

You know, I didn’t think I’d be able to find a Sports betting Joke video, but I looked around YouTube and came up with a really good one. The guy telling the joke is Hannibal Buress. He’s telling the joke live from Chicago and it’s a joke about betting on basketball.

That’s it folks. I sure hope you liked this weeks sports betting jokes. If you really liked it perhaps you wouldn’t mind sharing the post with your mates. Just use the social media icons you find below. 😉