Hazing Proves Sports Women Are Just As Dumb As Men

Wikipedia has a pretty good explanation of what hazing is. This is how Wikipedia describes hazing.

[redbox]Hazing is the practice of rituals and other activities involving harassment, abuse or humiliation used as a way of initiating a person into a group. Hazing is seen in many different types of social groups, including gangs, sports teams, schools, military units, and fraternities and sororities. Hazing is often prohibited by law and may comprise either physical or psychological abuse. It may also include nudity and/or sexually based offences.[/redbox]

Have you ever watched one of those movies where the guys go through some really stupid stuff just so they can get accepted into some fraternity or other? And then your girlfriend, wife or partner tells you just how stupid those guys are? Because there was no way in hell that women would go through that. Nope, women are just too smart.

To tell you the truth, even though I would never admit it out loud, I sort of thought that too. That was until I read the following article. This particular hazing, the one that proves sports women are just as dumb as men, involved the University of New Mexico women’s soccer team.

I couldn’t find any images of that particular hazing but I did manage to find one that allegedly involves the  hazing of some sorority of Princeton Cheerleaders. 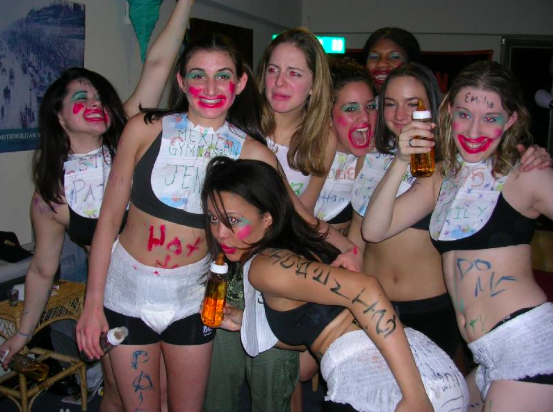 Two things that stand out in this photo. The first is that one of the girls definitely isn’t having a good time. The other is that the rest of them just proves that Sports Women Are Just As Dumb As Men!

Some of the dumb things these girls were forced to do included..

You can read a more comprehensive report at the KOB site.

It seems that hazing is not just limited to cheerleaders and women’s soccer either. According to USA Today hazing is widespread in the US. The article specifically talks about a hazing involving the State University of New York Geneseo women’s volleyball team. This particular hazing almost caused the death of a young freshmen who had a blood alcohol reading of 0.266%.

All in all it just goes to prove that no matter what women tell you, sports women are just as dumb as men.