I know it’s only round 2 in the AFL and it’s early days and all, but it’s nice to see the Adelaide Crows sitting at the top of the AFL ladder. What made it even better was the fact that I had money on them. Yep, it’s always pretty sweet when you win a bet.

I don’t know if you saw the Adelaide Crows vs Collingwood game but the way I saw it the Crows played better in the first half and slacked off in the second half. They should have wiped the floor with Collingwood.

Sure, the Crows won by 27 points in round two but you have to admit it, for those of you who watched the game, they could have done so much better. Man, I would have loved to have heard what Phil Walsh said to them at the end of the third quarter. He sure as heck did not look at all pleased with their performance. Could it be that he was letting them know of his displeasure that they let Collingwood ruin a killer lead?

I’m sure he wants the guys to give 100% for all 4 quarters. We all know that they’ve been want to take the foot off the pedal somewhat near the end of the game. You can’t afford to do that if you want to be finals contenders. I’m sure Phil Walsh knows that he wants to make sure that does not happen while he is the coach.

For a full roundup of the Adelaide Crows vs Collingwood game you should check out The Heralds Sun. I found their writeup to be pretty good.

Adelaide Crows vs Collingwood Round 2 Scores

The Crows will need to put in a full 4 quarter effort if they want to remain at the top of the ladder.Speaking of which, here is the ladder as it stands in round 2.

AFL Ladder Standing For Round 2 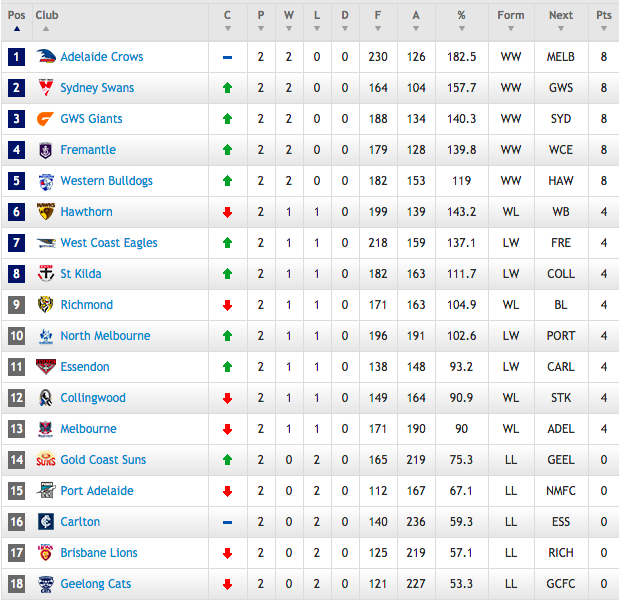 Speaking of ladders, have you entered William Hills Pick The Ladder Competition? If you haven’t click HERE for a chance of winning your share of $100 million! It’s probably too early to make any changes right now but you’d want to keep your eye on forthcoming AFL Ladder results.