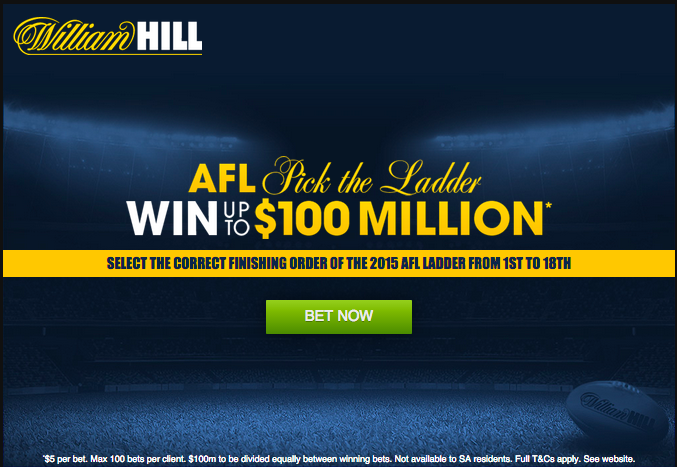 As you all know William Hill is now live, having replaced the old Sportingbet. I knew they would have some special deals in the kitty to reward members and to encourage new members to join. The first of those special offers has now been released, and it’s a little ripper too! I’m talking about their AFL Pick The Ladder promotion.

Win $100 Million In The AFL Pick The Ladder Promo

Yep, there are a lot of reasons to be excited about the AFL season being almost here and one of those is William Hills latest AFL Pick The Ladder Promo. I had a quick look at the Terms & Conditions and there are two points that I think is really interesting. The first is the second point.

2. A wager in the AFL Pick The Ladder 2015 (the Bet Type) will be a successful wager where the Client has nominated all 18 participating teams in their correct finishing order in the 2015 Toyota AFL Premiership Season Ladder as declared by the Australian Football League (AFL) at the conclusion of Round 23 (Successful Wager).

So, all you have to do to get your hands on a portion of that $100 million is to correctly predict the order of of the AFL ladder at the end of the season, That’s round 23. That’s a pretty hard ask, to get all 18 right, but the it’s worth having a punt considering how much is in the kitty.

the second interesting one is point number 8.

That means that if you’re the only one to predict the AFL Pick The Ladder correctly you will pocket the whole $100 million!