AFL Round 3 2018 Results Getting Better 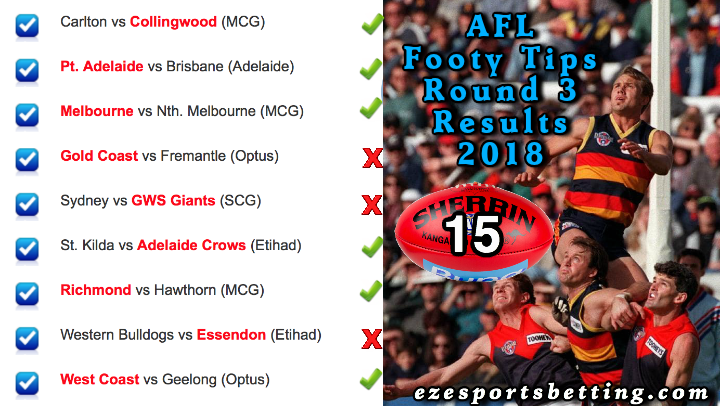 Too bad that I screwed up my multi-bet by picking two of the three losers in my AFL Round 3 2018 Results! Namely the Sydney vs GWS Giants and the Western Bulldogs vs Essendon games.

My first bad pick was the Gold Coast vs Fremantle game.

Personally, I thought that game was going to be a lot closer and that Gold Coast was going to be the winner. Apart from the second quarter, Fremantle dominated in that game. Gold Coasts only saving Grace was that Fremantle’s accuracy sucked. According to some, putting Bailey Banfield on Aaron Hall was a winning move!

The next game I got wrong was the Sydney vs GWS Giants game.

All I can say is that Sydney can thank their lucky stars that Buddy was able to kick the last two goals that gave them the win. When Sydney is playing you can never discount the Buddy Effect!

My final stuff up was the Western Bulldogs vs Essendon game.

I don’t care what anyone says, for me that was the biggest upset of the round. From what I saw Essendon’s biggest problem in that game was the lack of defence. The let the Doggies get past them way too many times allowing them to score. What I was hoping to be a comfortable Essendon win turned out to be Essendon’s embarrassing loss!

With Week three behind us, it’s time to try and work out the week four tips.