I just thought I’d have a look around the net this morning to see if there was any hot sports news that would possibly interest you guys. I did come up with a few and here they are.

Yep, James Hird is due on the witness stand again this morning.This day 2 of the Essendon – ASADA hearing. ASADA being 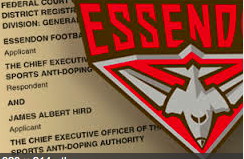 the Australian Sports Anti-Doping Authority started by the Government to protect the the Australian sporting integrity by eliminating doping.

ASADA went after Essendon last year apparently knowing that there were legal problems about their joint legal investigation with the AFL against Essendon. James Hird the suspended Essendon coach has already told the court,

“I signed the deed settlement under great duress, threats and great inducements to get me to sign it,” Hird told the Federal Court.”

While it will be interesting how all this will evolve one wonders if any of it is worthwhile because I heard on one news program yesterday that even if ASADA loses the case they will simply regroup and take another tack on Essendon 2012 drug scandal. ASADA will not go down easily as the prepare to Hammer Hird in court today. Personally I hope that Hird wins his day in court.

I remember watching John McEnroe in his hey day waiting for him to blow up because in those days it was so entertaining. It looks like the Aussies have their very own McEnroe in Marinko Matosevic. I haven’t really followed Marinko’s tennis career but it seems ‘losing’ it may be a bit of a habit for him earning him his ‘Mad Dod” nickname. In this latest video you will see him fire up as the umpire overrules what he thought was a winning ace. Winning moments later he refuses to shake the umpires hand and even appears to swear at him. Check out the short video to see all that transpired in the final seconds of the Cincinnati Masters match.

I included this in the Hot Sports News post because I know how much my readers like sexy sports women. That’s why the Hot Sports Babes posts has proved so popular. The last time I included a news presenter in a post was in my Hot Body Paint Sports post which featured Andressa Urach. Today I’m going to feature another very sexy sports presenter who has not impressed her bosses by her FHM photo shoot. I’m talking about Charlie Webster who is the Sky Sports News presenter. Perhaps they’re not happy with her photo shoot but I reckon her sports fans are. Knowing how happy they would be to see the sexy Charlie Webster photo shoot I’ve gone to great trouble to find a video of it. 😉

Perhaps you would like Charlie featured in a Hot Sports Babes post? If so just let me know in the comments below.