Every type you place a bet, win or lose there is a betting lesson learned. In my post Common Questions About Online Betting I mentioned how I placed a bet on the Australia vs Netherlands that was played in the early hours of this morning. I knew it would be a bloody miracle for the Socceroos to beat the Netherlands but I took the long shot because of the special deal offered by Sportingbet. (Their World Cup microsite

offers heaps of latest World Cup news) I didn’t stay up for that game but I did catch the highlights first thing in the morning. Even though Australia lost to the Netherlands 2-3 it looked like a thrilling game. As far as I’m concerned the Socceroos did us proud. Netherlands were the ones who beat Spain, who just happened to be the last World Cup winners, 5-1. Again, I watched part of that game and Netherlands were nothing short of spectacular. So, what was the betting lesson learned from placing a bet on that game?

The problem a lot of gamblers have when placing a bet is greed. It’s an all or nothing situation. It’s the same when buying and 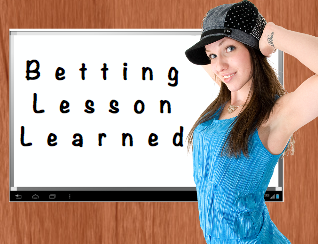 How To Win More In Sports Betting

Wouldn’t that be betting lesson worth learning. At the moment I let the bookies sway a lot of the betting decisions I make. I look at the odds and then I make a decision. I reckon I’d have more luck if I was to work out my own odds. If I could do that I would then be able to work out which bets had the best value and place a bet only on them. I suppose in the way I would be more bookie than punter. Perhaps that way I’d win more than I would lose. There is one problem with that. It would take a hell of a lot of work. I’d have to analyse all the data. Check the history of the horses, AFL teams or whatever. Is it going to rain? Whats the track like? Who’s injured and all that other shit you need to really make an informed decision. I don’t know about you but as far as I’m concerned that would take all the fun out of placing a bet. What do you think? As far as I’m concerned, I’d rather make those mistakes and learn from the. For me betting is all about entertainment. I do it to makes the sports I watch even better. If I lose every now and again.so what. As long as I got a kick out of the game. Feel free to leave a comment about your betting lessons learned? Perhaps you can elaborate how you learned those lessons? I’m sure we can all learn from everyones experience.

Just to finish off, there is one more lesson I’ve learned today. Tim Cahill can do more than just use his head for those great goal shots.