Before I discuss the topic, Why did the Crows lose the Grand Final I want to say right from the start, the Crows played like shit! Where were the Crows yesterday? They certainly weren’t at the MCG, that’s for damn sure. I don’t know who was masquerading as the Crows but that sure as hell wasn’t the same team that did all they could to get to the Grand Final!

Why Did The Crows Lose The Grand Final

In no particular order here are my reasons for the Crows losing the 2017 AFL Grand Final.

Perhaps if the umpires got it right, the Crows performed better and the coaching stuff done their bit Richmond may have still won it, but at least it would have been a better finals game. 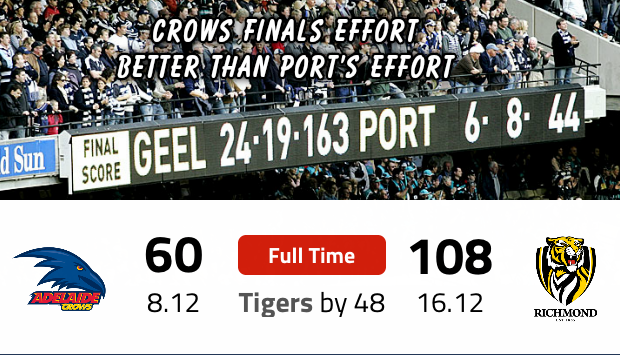 I didn’t bother much with social media after the game but I heard it was rife with Power supporters and all those band wagon Richmond backers who were bagging the Crows. I’m not at all surprised from the Power fans. After all, they probably find it pretty hard to remember what happened last week let alone their dismal effort in the 2007 Grand Final where they lost against Geelong by a whopping 119 points! Now that was probably one of the worst Grand Finals results ever.

I know I shouldn’t stoop to their level, but sometimes these things just have to be pointed out.