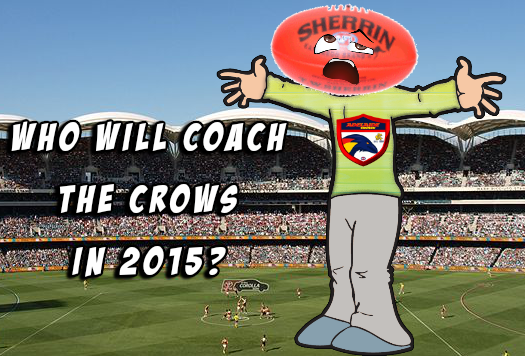 Who Will Coach The Crows?

I said in a previous post that it was a mistake to sack Brenton Sanderson. Until they find someone to coach the Crows the club is pretty much in the lurch. For awhile there hopes were running really high when rumours were about of the Crows securing Alastair Clarkson to coach the Crows. Shit, if that turned out to be true I would have almost felt placated at Brenton Sanderson’s sacking. As unfair as it was,

The Age as an interesting article of AFL coaching contenders for the Adelaide Crows. They include, Stuart Dew, Brendon Bolton, Brett Ratten, Mark Bickley, Scott Burns, Leigh Tudor, Peter Sumich and a couple of others. Brett Ratten seems to be the only one with any senior coaching experience. Apparently he had a 51% winning record at Carlton. Shit, that no where good enough as far as I’m concerned. Out of the 22 games this year Sanderson won 11. That’s a 50% win ration by my reckoning so Brett Ratten isn’t offering much better.

Out of that bunch I personally would like Mark Bickley. He at least has ties with the club and you’d hope the players would find him more accepting.

The ABC had Crows denying rumours of hiring Alastair Clarkson. Yes Adelaide would love to hire an experienced coach but their availability seems to be as rare as hens teeth for the 2015 season. Perhaps the sacking of Brenton Sanderson was slightly immature after all.

According to the ABC article, “The Crows have formed a four-member panel for the initial phase of their search for their next coach – football operations manager David Noble, development coach Alan Stewart and board members Mark Ricciuto and Andrew Payze.” I reckon Ricciuto will be trying his best to secure a good coach for the crows seeing as how he probably had a big influence in Sanderson’s sacking.

All I can say is it would have been nice for a qualified coach was around to help in drafts picks and the like. Doesn’t look like that’s going to happen for the 2015 pick though.  :thumb_down: