I had to attend a wedding that day so I missed out on all the action. As it turns out though I didn’t miss out on all that much as, according to the ABC, Sydney Sixers Stun Adelaide Strikers To Reach Big Bash League Final. Apparently the Adelaide Strikers were pretty dismal going all out for just 94. Man, that is pretty shithouse for a team that was doing so well in the season being on the top of the ladder for so long.

I checked my Sportsbet account to check my losing bet only to find that it was still pending. I reckon that’s because the finals isn’t over yet and they’re waiting for its completion. Whatever the Big Bash League Final outcome I know for a fact that mine was a losing bet.  :pull_hair:

At least the Adelaide Strikers website was able to come up with some positives including the record crowds and the fact that the Strikers had the biggest fan base. Too babd they weren’t able to please that fan base by a least giving them a decent game to watch.

And The Big Bash League Finals Winner Is…..

Naturally the big question is who will win the Big Bash League Finals. That’s what all the punters would love to know. What we do know is that it’s between the Sydney Sixers and the Perth Scorchers. Once again I asked Lady  Luck as to whether or not I ahould place a bet. She pointed to Centrebet

this time and as I’m not a Centrebet member Fortuna is telling me I should not be placing a bet. 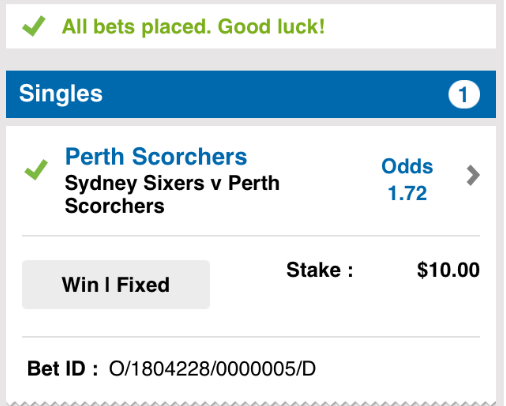 As you can see from the image above, once again, I’ve gone against Lady Lucks advice and placed a bet on the Perth Scorchers to win. Why the Perth Scorchers? Basically because after what the Sydney Sixers did to the Adelaide Strikers I’m willing them to lose.  :tongue_out:

Why bet at all? Because I’m a responsible gambler and I only bet what I can afford to lose. I haven’t been betting every week so I have extra in my sports betting account. Not to mention the small wins that I have had 😉 And most importantly, because I don’t have a wedding on and I’m planning to watch this game and that small bet will make it that much more exciting to watch.

As to who will win the Big Bash League Final? I reckon we will have to wait for the end of the match to find out.  :angel: As to when is the Big Bash Final. The answer is on Wednesday the 28th January in Sydney. Sydney reckon they have one big advantage on the Perth Scorchers, that being the home advantage. But, just remember it didn’t do Adelaide Strikers any bloody good now, did it?

Whoever you place your bet on I wish you the best of luck. :thumb_up: