On April the 4th I wrote a post called Best Smartwatch Bets Sports Smartwatch. I mentioned in that post how I always wanted a smartwatch, ever since the introduction of the Apple Watch! Only problem is the Apple watch is way too expensive. That’s why I ordered the WTC L38 Smart Sports Watch (that link has been updated with a newer,cheaper smartwatch)  from my Sports Store on the 4th April. You’ll find a link to my Sports Store in the menu above  :drunk: I got the watch on the 30th April. Its now the 13th of May and about time for the WTC L38 Smartwatch Review! 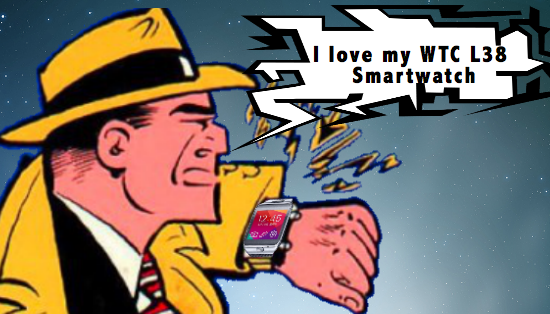 Because I also own a Fitbit Charge HR activity wristband I thought about comparing the WTC L38 to my Fitbit but that wouldn’t really be fair as one is an activity tracker while the other is full on smartwatch. Shit, Dick Tracy himself would have loved to own the WTC L38 Smartwatch! Having said that there are a few comparisons that can be made.

The first comparison would have to be the price. The Fitbit Charge HR is about $170 in Australia while the WTC L38 Smartwatch only set me back $94.

I would love to compare my smartwatch with the Apple Watch but that won’t happen unless the kind people from Apple give me one to review. 😉

Does The WTC L38 Smartwatch Work With the iPhone?

As you can see in the video below the smartwatch effortlessly pairs with my iPhone 6s. The only function that I’ve found doesn’t work with the iPhone is that you can’t transfer images from the smartwatch to the iPhone via bluetooth. I questioned the guys I bought it from and they said that feature only works with an android smartphone, I tried it with my son’s Samsung Galaxy and it worked fine

Everything else seems to work fine. It picks up notifications as well as messages from the iPhone. The constant notifications was getting a little annoying so I changes the notification settings on the iPhone so only the important one popped up. You do that by going to settings, notifications then select the app and turn off ‘Show in Notification Centre’

The smartwatch has other features that I haven’t mentioned yet. They include:

There are some other features, some of which I mention in the video, but I din’t find them important enough to bring up.

You check out the smartwatch in the Sports Store. (Link updated with newer watch.

I hope you liked my WTC L38 Smartwatch review. If you did I’d love it if you would share it with your friends 🙂

If you have any questions feel free to ask in the comments section.