It’s been awhile since my last sports joke so I figured it was about time for another one. Knowing how popular blonde jokes are I thought I’d make this one a blonde sports joke orientated post.

A blonde began a job as an elementary school counsellor and she was eager to help. One day during recess she noticed a girl standing by herself on one side of a playing field while the rest of the kids enjoyed a game of soccer at the other.

The blonde approached and asked if she was all right.

The girl said she was.

A little while later, however, Sandy noticed the girl was in the same spot, still by herself. Approaching again, Sandy offered, “Would you like me to be your friend?”

The girl hesitated, then said, “Okay,” looking at the woman suspiciously.

Feeling she was making progress, the blonde then asked, “Why are you standing here all alone?”

“Because,” the little girl said with great exasperation, “I’m the goalie!”  :soccer:

In one of my previous sports jokes posts I introduced you to one of Sexy Sal’s blonde jokes. I love Sexy Sal’s blonde jokes but Sexy Sal belongs to WassupBlog. I think it’s only appropriate that EZ eSports Betting deserves it’s very own Sexy Sports Comedian. I looked high and low for a sexy sports mascot that would fit the bill and I finally found her.

She’s Victoria and she was named after the Roman Goddess of the same name. Even though the Goddess Victoria was more a symbol of victory over death determining who would be successful during a war I have named her the Goddess Of Sports

Our Victoria also has a love for sports and loves it when her teams are victorious. She also has a great sense of humour and loves to tell a good joke. Today is Victoria’s debut on ezesportsbetting.com, and keeping with the theme of this post it just happens to be a blonde sports joke. 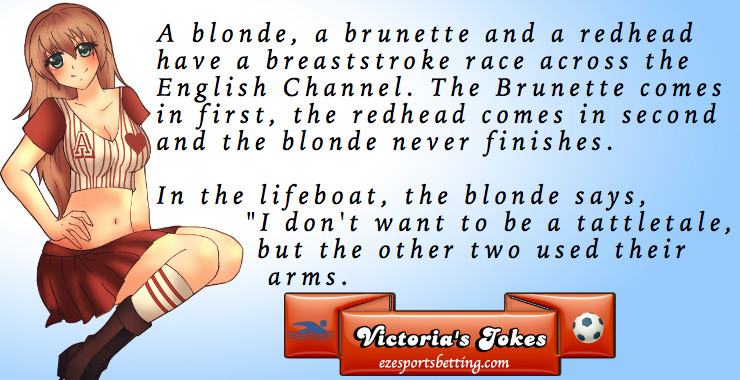 I couldn’t find any blonde sports jokes on YouTube but I did manage to find a sports related video that I know you will enjoy. Heck, you may even see a blonde or two in there  :tongue_out: It’s called…

That’s all folks. Don’t forget to vote for The Hottest Sports Babe.