After my last post on Hot Sports Babes I’ve been getting all these emails from subscribers, thanks for subscribing guys, about whether or not I’ll be featuring any naked hot sports babes. Sorry guys, I’ve afraid this is not that sort of site. To be featured in a Hot Sports Babes post the babe has to have something on. 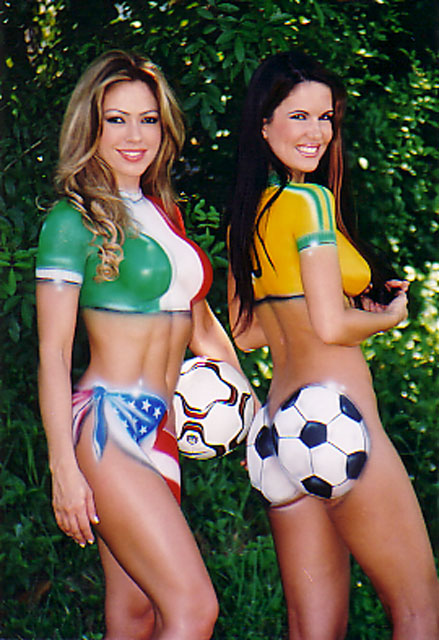 Because of the World Cup fever I really wanted to post some great shots of actual sports fans wearing nothing but body paint. After hours of searching I couldn’t come up with much. Heaps of photos of models doing photo shoots but none of actual fans.

Like these two lovely ladies on the right for example. No-one can deny that they’re hot or that they’re doing a great job of promoting sports. You have to admit that those bus representing soccer balls are quite a site. They’re both sporting killer smiles too.

But alas, they’re not fans and in my opinion are definitely models. I did manage to find some dedicated fans from the Euro 2012 games though who, as you can tell from the image below that one, are dedicated soccer fans.

You have to admit that hot sport babes who go topless and paint their teams sport colours over their lovely pert boobs definitely have to be true sport fans, That and the fact they’re also not ashamed of their bodies. 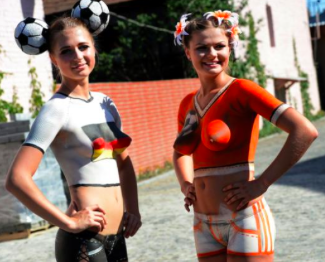 Then of course you may get those hot sport babes who decide to go totally nude body paint style. Now that would take some real guts. Especially if you’re going to rock up at a sports venue. You kinda have to wonder whether or not these totally nude hot sports babes would be allowed into the sports venue. I know I wouldn’t mind it one little bit if the guys at the gate decided to let them in. 🙂 Although I would have to admit that I would find it pretty hard to concentrate on the game 😉

Strangely enough though I did manage to come across an interesting article involving body paint. It involves a former model turned reporter who seems to be stalking a well known soccer player. That soccer player is Cristiano Ronaldo and the woman is Andressa Urach.

So, for this weeks sports body paint wearing babe, who is definitely a sports fan, I give to you Andressa Urach. 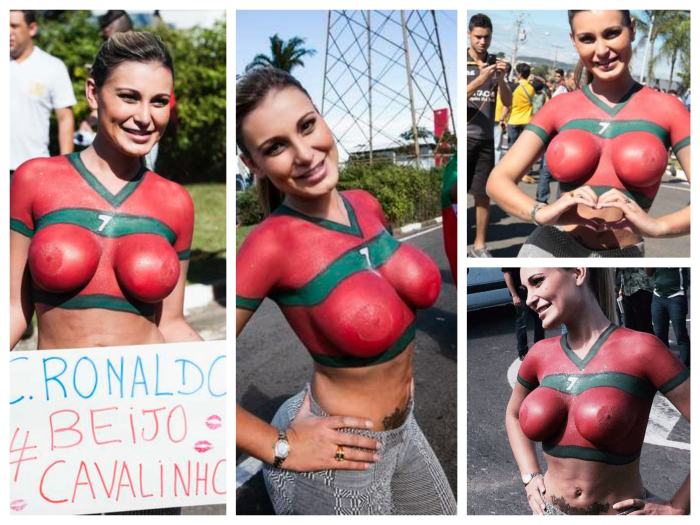